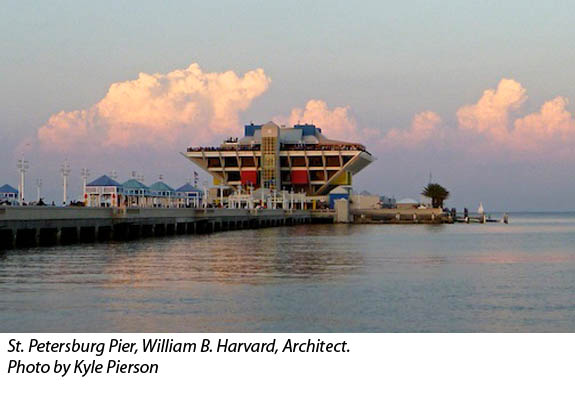 In Tampa Bay, all eyes are focused on St. Petersburg’s Pier asking will it stay or will it go? The big reveal is Wednesday and Thursday. Full disclosure,  I live in St. Petersburg and I’ve studied the Pier.

For the second time in 5 years, the city is about to reveal the short list of contenders for the Pier redesign.  Eighteen months ago, the city aborted a plan (partly based on economic reasons) to spend $50 million  to build the Lens by Los Angeles-based  architectural firm Michael Maltzan.

Since then, two factors could shift the weight of  the variables.

First,  St. Petersburg’s downtown now literally booms with the sounds of the economic recovery as construction on several multi-story condominiums is underway. Throngs of people,  many of them Millennials, have picked up the pace of life along tony Beach Dr.

Secondly, according to The Atlantic’s City Lab, architectural firms are also discovering the advantages of working in up-and-coming “second-tier” cities. And some are picking up awards based on regional designs. Many of these architects are Millennials new in practice.

On a global scale, St. Pete is a speck; on a national scale it is a small city; it may not even approach second tier status ( in 2013 the population was  249,688).  City Lab (The Atlantic’s web site) featured Louisville, KY. (population, 609,893) as an example of a  second tier city.  Amanda Kolson Hurley’s article focused on Louisville based De Leon and Primmer Architecture Workshop. The firm won the 2015 AIA Institute Honor Award for the Wild Turkey Bourbon Visitor Center.

The  $46 million budget for the second-round Pier redesign drew proposals from firms located in New York, Chicago,  and the International firm,  FR-EE (who has ties with  Mesh of St. Petersburg,  and Civitas of Denver).

Now the question is, does regional awareness in design matter? Will our younger population respond to the new proposals for the St. Pete Pier with any greater enthusiasm than what was proposed two years ago?

The 2012 designs came from two  internationally known architects,  Bjarke Ingles Group (BIG), The WAVE; Michael Maltzan Architects (MMA), The LENS ; and one with local ties,  the Eye by West 8 Landscape Design and Architecture. The locally-based Eye came in last in the 2012 competition. All those designs were based on a complete tear down of the existing building, although some kept the caissons.

As it now stands(except for the various renovations), the Inverted Pyramid represents regional Bauhaus Modern Architecture.  Appreciation for Modernism has also been enjoying a resurgence.  This change of heart about Modern architecture may have influenced the new design proposals. Citizens of St. Petersburg will have their say next week.