Two we lost in the fight to preserve cultural icons 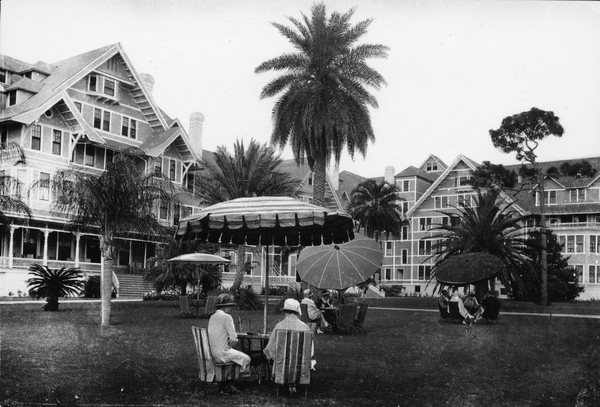 The bells pealing on New Year’s eve sounded a death knell for two American architectural icons of the 20th Century.  The National Trust for Historic Preservation published the news on their website even before the New Year.    The construction techniques of these two spanned the century — from wood to concrete, from Queen Anne  gables to the concrete flat roofs. The purpose of the Modern building elevates the bureaucratic to the  iconic with its design, while the turn-of-the-century resort harkens back to a the Guilded Age.  The buildings speak volumes about changing American lifestyles within the span of just 70 years.  Neither of these architectural landmarks were iconic enough to preserve it as a monument to their time, place, or history. 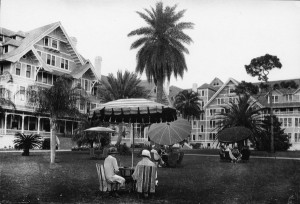 People having tea on the lawn of the Belleview Biltmore Hotel in Belleair, Florida, circa 1925. State Archives of Florida, Florida Memory. <https://www.floridamemory.com/items/show/271948>, accessed 11 January 2016. 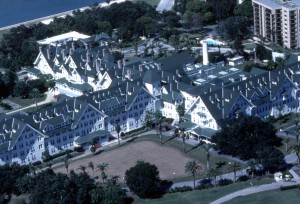 On the Florida Gulf Coast, in Belleair, the Belleview Biltmore Hotel  sits on 21 lip-smacking acres on a bluff overlooking Clearwater Harbor. Built in 1897, its a monument to the Guilded Age.  The fictional Earl and Countess of Grantham of Downton Abbey, Lady Mary Crawley, Lady Edith and their entourage of butlers and maids would have settled for nothing less than a stay in the “White Queen on the Gulf” for their holiday in America. In reality, the Duke of Windsor  vacationed here.  The hotel was the last of railroad magnet Henry B. Plant’s monuments to exotic destinations for the upper class. Now,  a new generation of the well heeled  will be the “stewards of the heritage” (so says developer JMC Communities). Despite its distinguished past, and that it’s on the National Register of Historic Places, it will be torn down and plans are underway to build  Belleview Place, “luxury carriage homes and condominiums,” to replace it.  Lord Grantham  of Downton Abby would understand. A strong storyline in the current  Downton Abby saga is that the Granthams can’t keep up the  estate.  If one is forced to sell off parcels when maintenance is too expensive,  there are  “stewards  of the heritage” who will  pay higher condo fees. 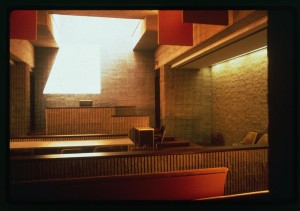 Paul Rudolph’s 1970 Government Center in Orange County, Goshen, New York has has been clinging to life since 2011 when Hurricane Irene drove wind and rain into every crack and seam in the  roof. Porous roofs are often the first reason cited for tearing down the whole building. But, really, what roof doesn’t leak? I wrote about this important building  and the campaign to save it earlier this year. The building is noted for Rudolph’s imaginative use of space and a symbolic trend toward openness of design in public architecture. The picture above shows the interior of the building, a less recognizable view of the building. The distinct boxy exterior is usually the profile featured in pictures. I chose the this shot of the courtroom to show the natural light, and  warm orange  glow reflected on the concrete walls.  Brutalist buildings look stern on the outside, but can be surprisingly soft and light on the inside. The Orange County Government Center was added to the World Monuments Fund Watch  List.  However, this designation  didn’t protect it, and in 2015 Orange County won a legal battle to gut the interior.