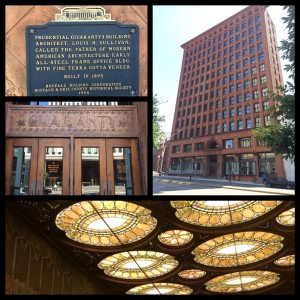 As a native Buffalonian and garden lover, I was surprised to learn that Fredrick Law Olmsted designed the city park system. I already knew that Louis Sullivan built the amazing, and almost-demolished, Guaranty Building and that City Hall was designed by John Wade in what he dubbed the Americanesque Art Deco style (1932). The city’s booming growth came to a grinding halt just 30 years later. In the 1960s, the city became crusted over with the orange patina of rust when middle class people, such as  my parents, realized that Buffalo had a reversal of fortunes. Their story is a familiar one. Typically, those with white collar jobs moved to the suburbs.  For instance, when I and my siblings reached school age, my parents moved to the suburb of Amherst. In 1969, they  joined the great migration of educated workers who gladly moved to Florida to escape the economic “armpit of the nation.”  Little did I know that 40 years later, I’d return to rediscover it’s rich architectural history. Thankfully, preservationists know they have a treasure to protect. 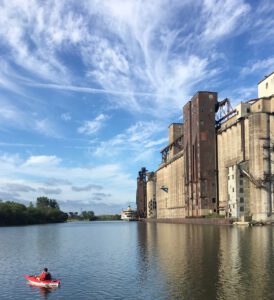 As I paddled the Buffalo River, I got a close up view of the grain elevators. They’re iconic to Buffalo history. The city sells T-shirts that read, “My city smells like Cheerios.”