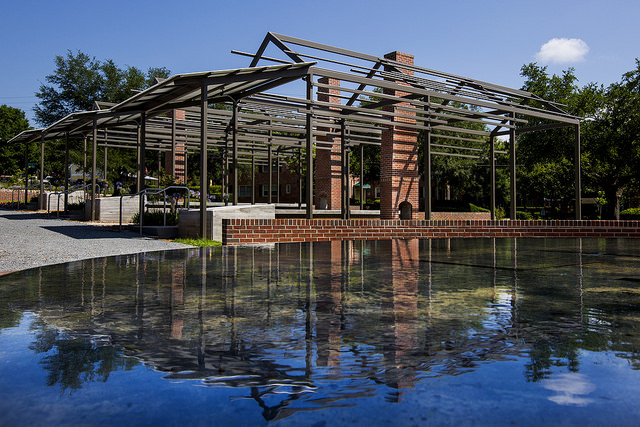 It’s nothing more than a simple metal frame with a gable roof and a stone hearth. The structure is just an outline —  nothing but a ghost image. Not what you would expect to win first place in Florida’s 2014 People’s Choice architectural competition held by the American Institute of Architects (AIA, Florida Chapter).

It’s not the innovative design that the AIA recognized; it was the history. Principal Rodney Lewis and Creative Director M. Hays of Lewis + Whitlock Architects resurrected the bones of a bitter history and built what they called spirit houses. 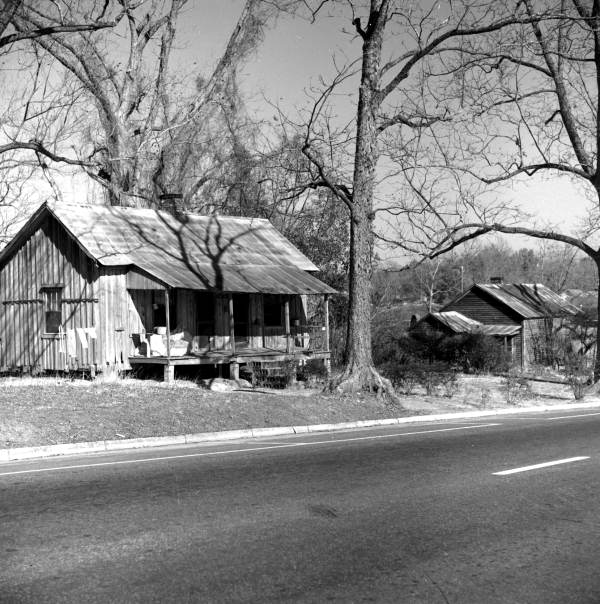 Photographed on January 3, 1963.
Smokey (or Smoky) Hollow was the area south of Apalachee Parkway and east of Suwannee Street. It was condemned in the 1960s to make way for the Florida Department of Transportation building.
State Archives of Florida, Florida Memory, http://floridamemory.com/items/show/156010

The simple frame structures recall the deep scars left in Smokey Hollow when Federal Urban Renewal funds were used to obliterate 500 middleclass African American homes in the early 1960s. Jennifer Koslow of Florida State University says after the residents were forced to move, the city never developed the land. It was a parking lot or just left vacant. Further, the Smokey Hollow homeowners were never given any federal assistance to move to public housing. The spirit houses in the 24-acre Cascades Park are a memorial to people and the shotgun-style dwellings that once stood there.

In Tallahassee, The “Dare to Dream Festival” will take place on MLK Day, January 19, 2015 in Cascades Park. Voices of rejoicing from ghosts of the past along with their descendants will no doubt fill all the corners in the spirit houses.