Smithsonian to be Modernized

The Bjarke Ingels Group (BIG), known for futuristic designs, has been selected to reimagine the Smithsonian entrance and the surrounding campus.  Henry Melcher who writes for Architects Newspaper described the plan as renovating  “the most hallowed stretch of grass in America.”

This project is sure to spark a conversation  as colorful as a July 4th fireworks display. 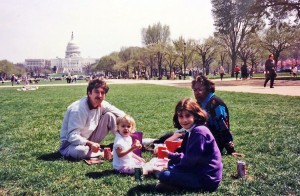 My family having a picnic on the Washington Mall in 1994.

BIG says they intend to tread carefully when considering the new Millennium renovations for the 154-year-old Castle. BIG’s conceptual plan echoes the bright light and open views of other large scale projects imagined  around the world.

The Smithsonian South Mall Master Plan puts the castle entrance in the Haupt Garden behind the Castle and adds wing-like elevated flower beds. That’s just one of the futuristic renovations. The interior of the institution also gets a dramatic makeover.

Funds for the $2 billion renovation project (estimated to take 20 years) come from private donors. Raising the money maybe the easy part of this proposed project.  Many Americans have an emotional attachment to the “hallowed stretch of grass” (The Mall)  in front of the Castle.  How do architects strike a balance between the sacred and the secular in the built environment in the new Millennium? It’s a question coming up more often as historic buildings deteriorate. How much change is acceptable without losing the iconic characteristics of the place?