Seattle Central Library: a Model for the Information Age 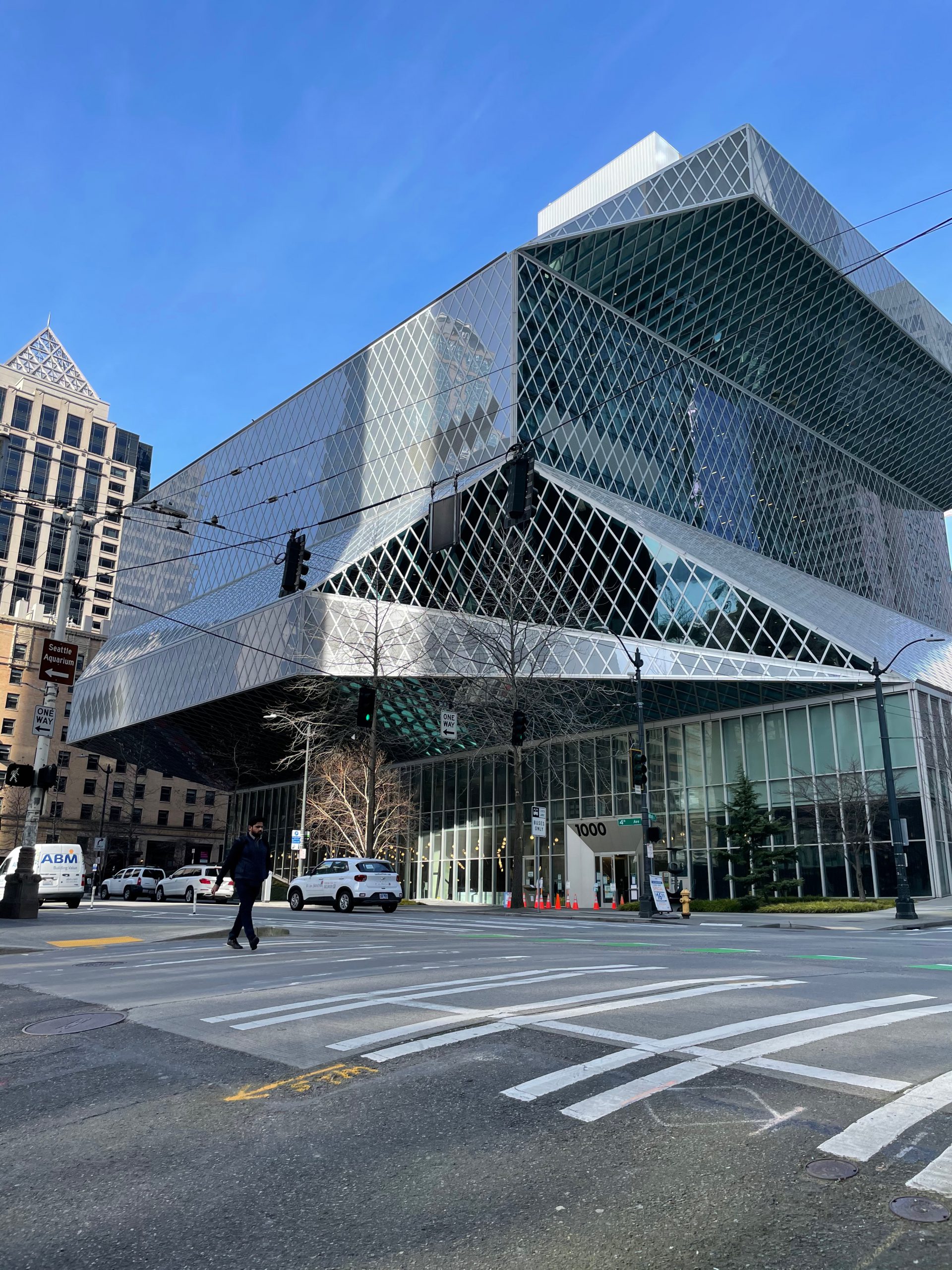 The word library conjures memories of stacks of books and librarians whispering, “hush.” The 18-year-old Seattle Central Library is nothing like that; today, it’s a place for people to gather information however it’s communicated. The architects argue that their striking design isn’t about their egos; rather, what drove the project was the need for a modern library in the new millennium. In 2004, Rem Koolhaas and Joshua Prince-Ramus recognized that the design must serve the patrons as they currently used it. The architects took those dominant uses and rearranged the space. They didn’t try to predict how spaces might evolve in the future, so those areas are intended to be flexible. A study revealed that two-thirds of the building was used for “social functions”; this information was a big eye-opener for the librarians.  The remaining third of the space was used for books. Based on this report, the new concept generated a flexible five-platform plan that comes off looking a bit like a teetering stack of books. Prince-Ramus characterized the upper four levels as a “parking garage for books.” The designated “spaces” are based on the Dewey Decimal System and can be expanded or restricted according to future needs. In addition, this floor plan actually makes it easier to find books! 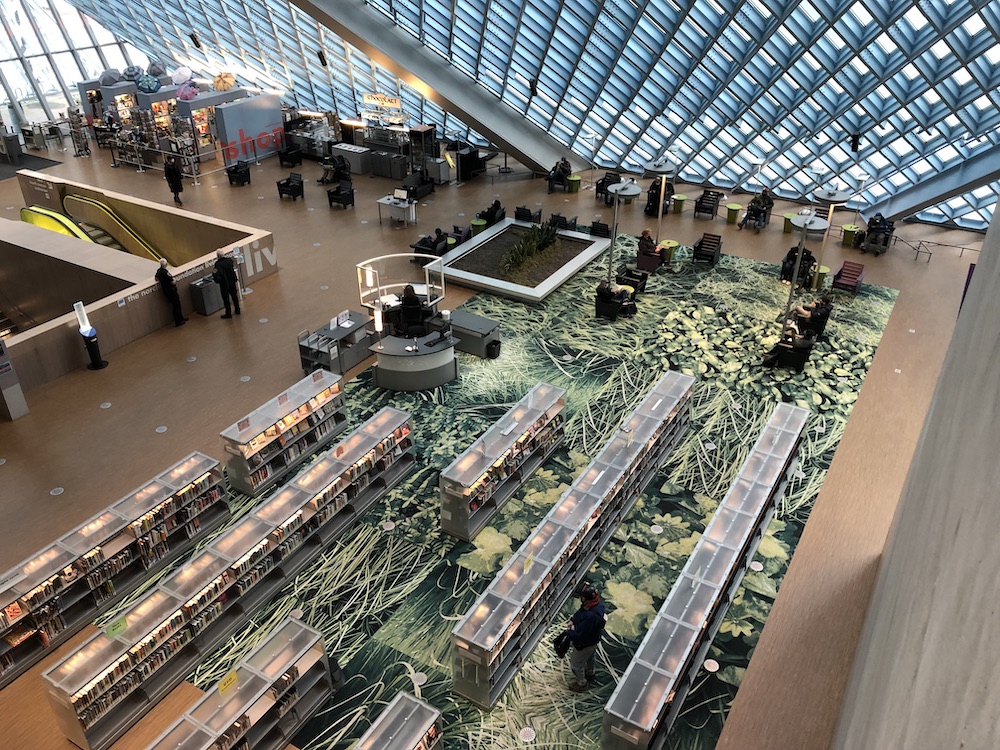 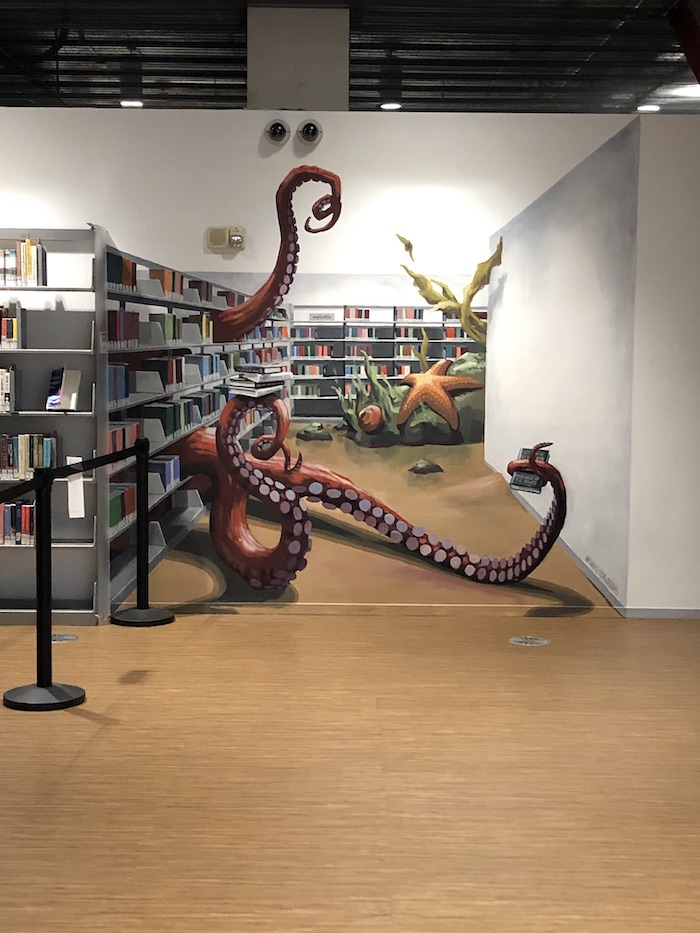 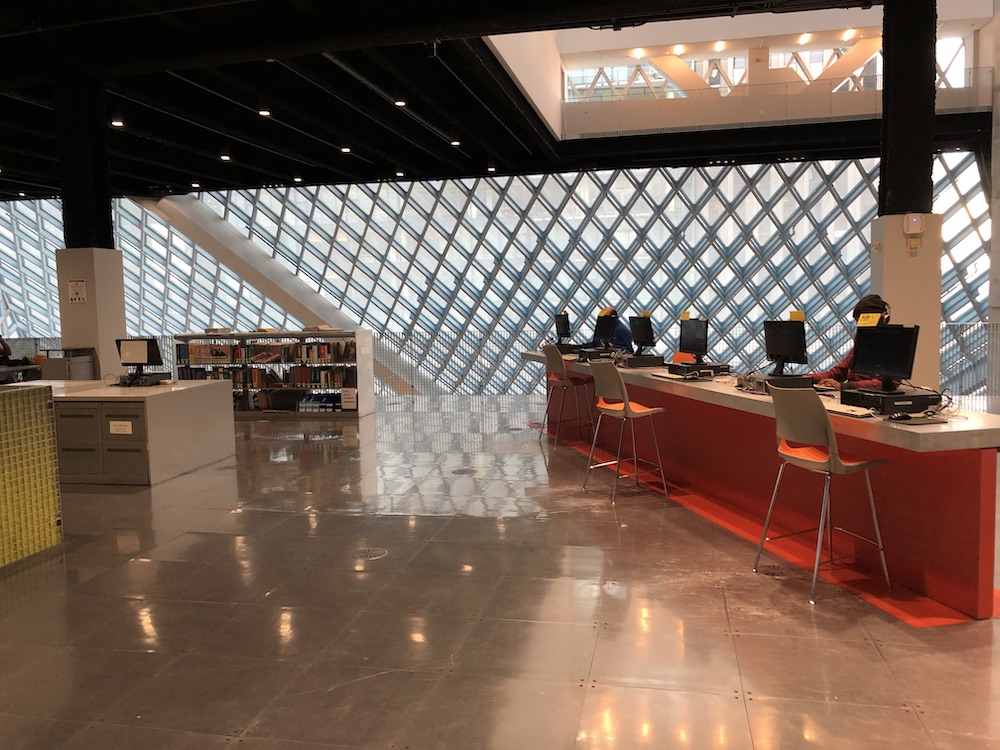 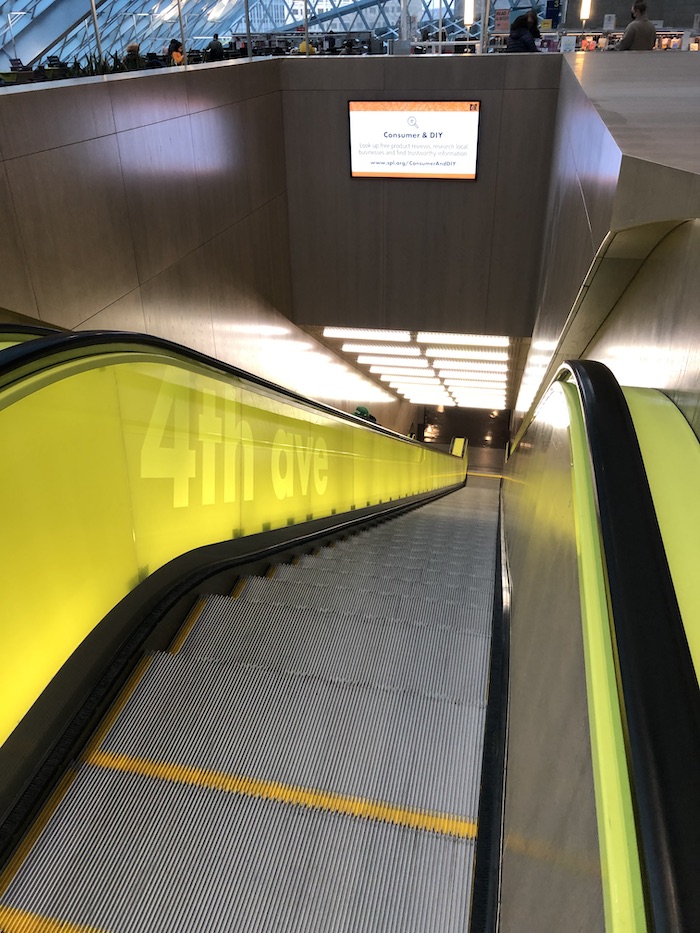 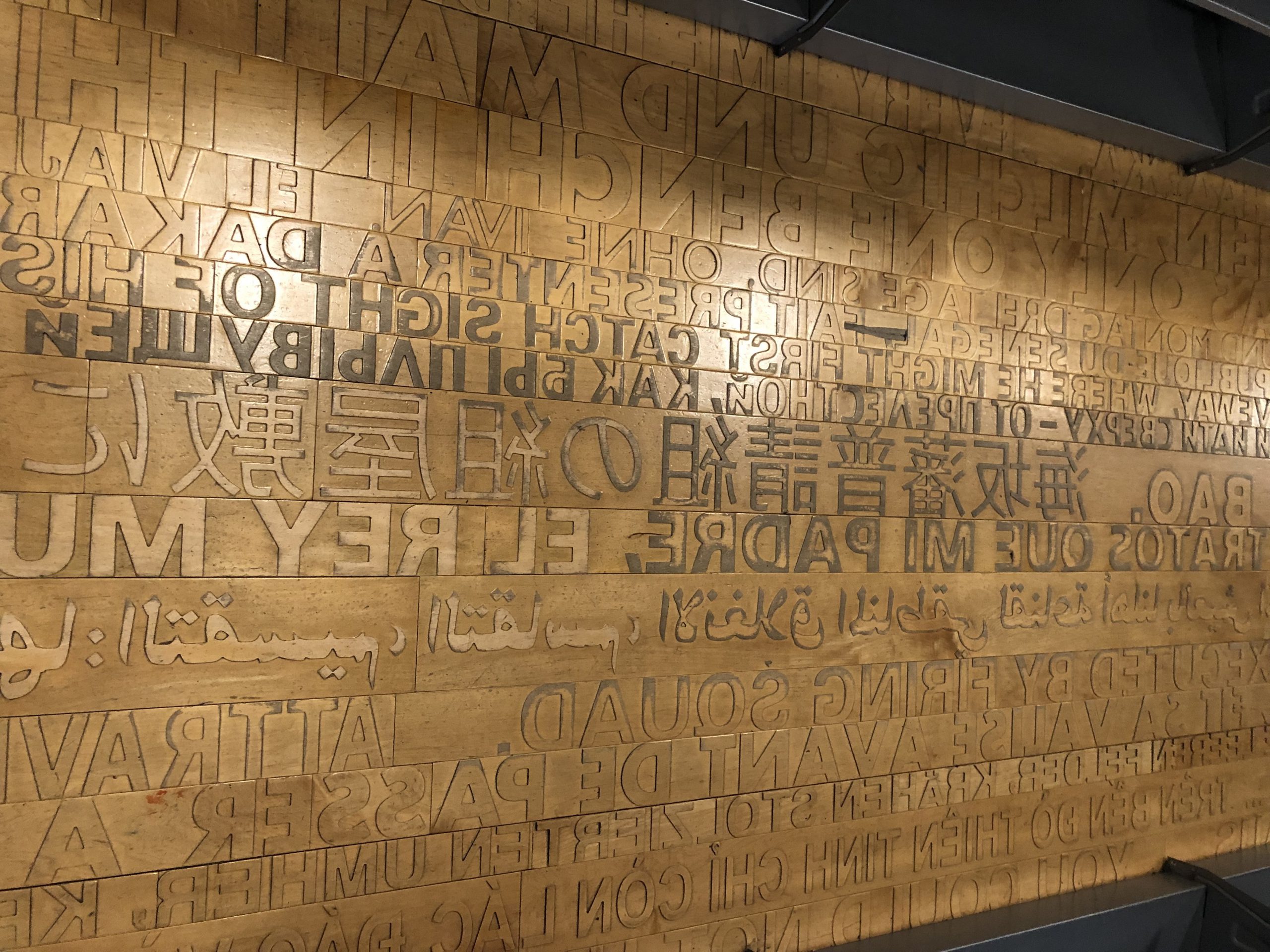 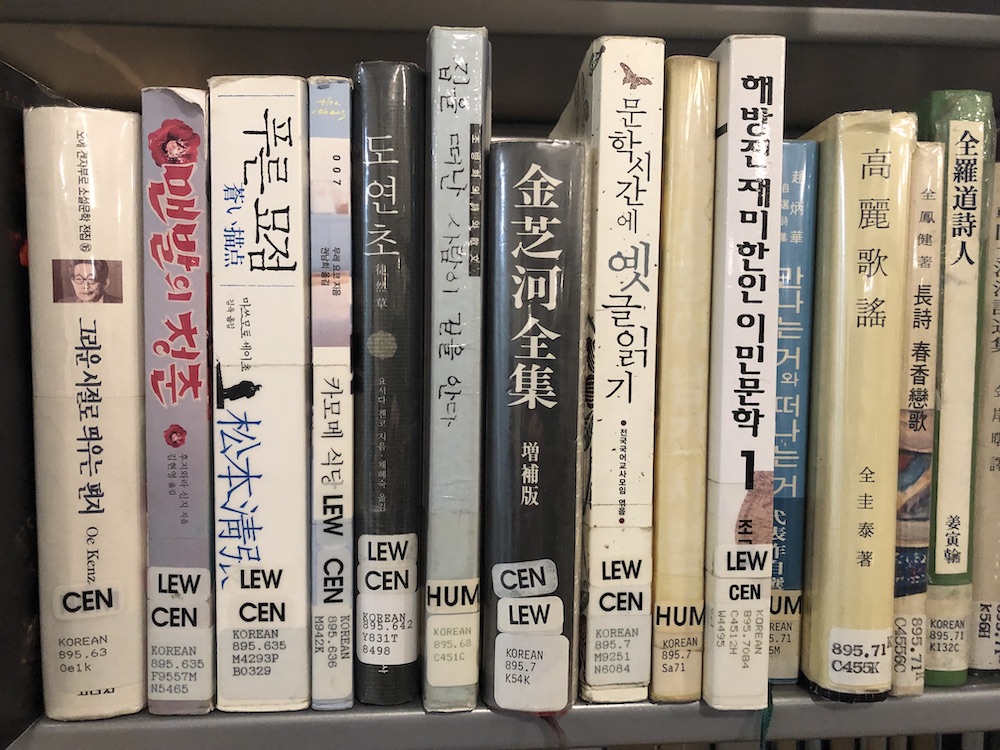 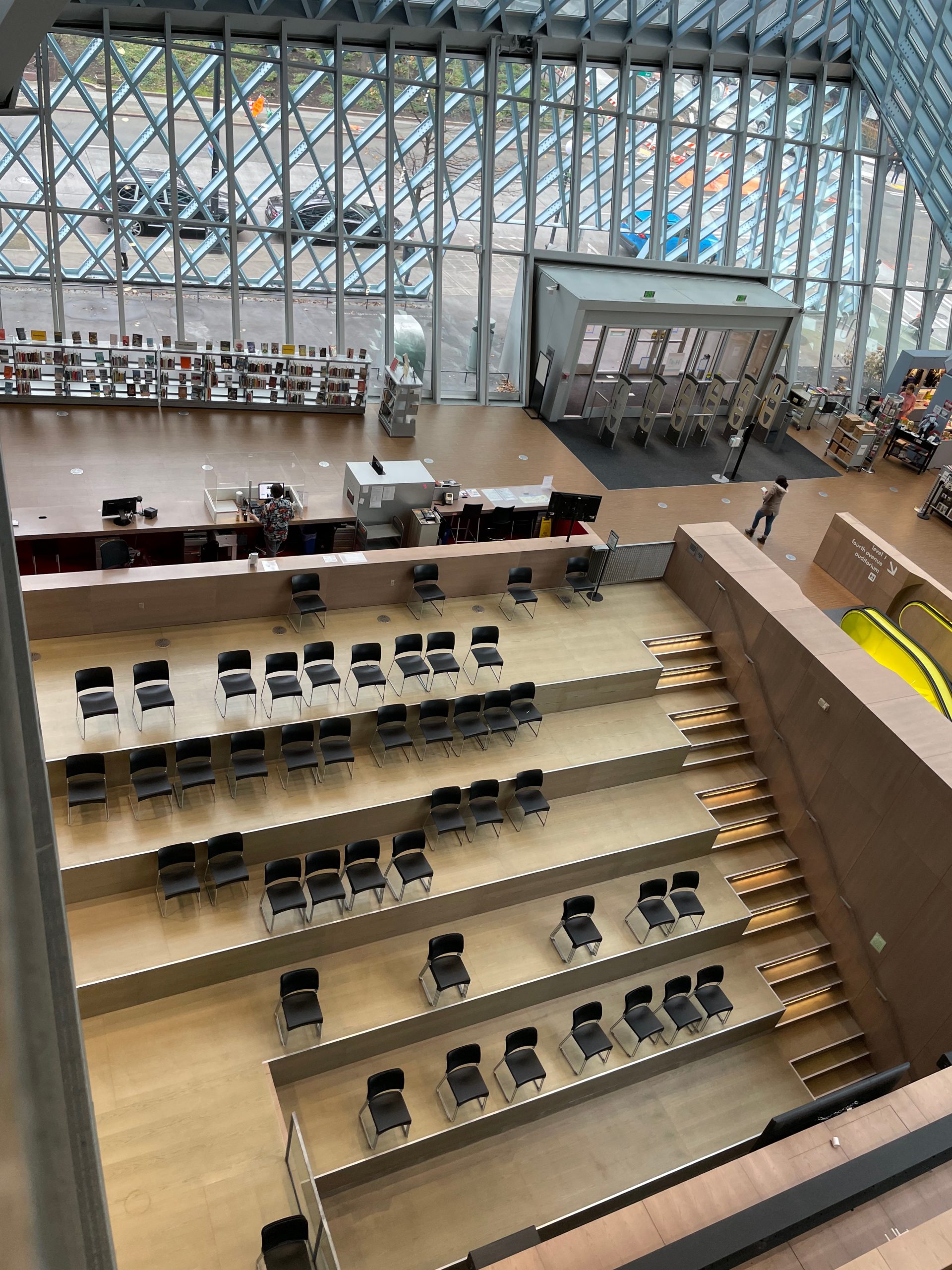 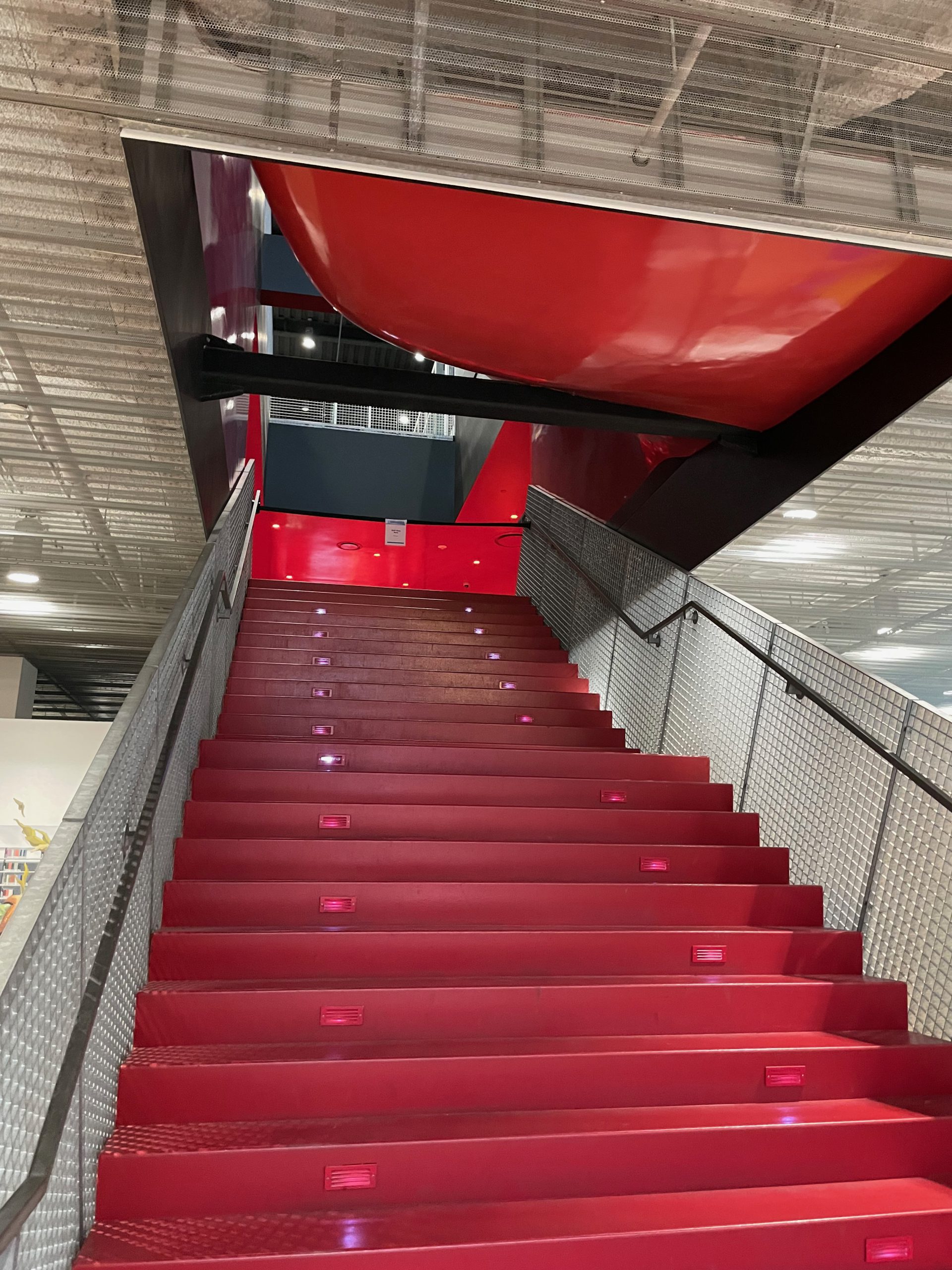 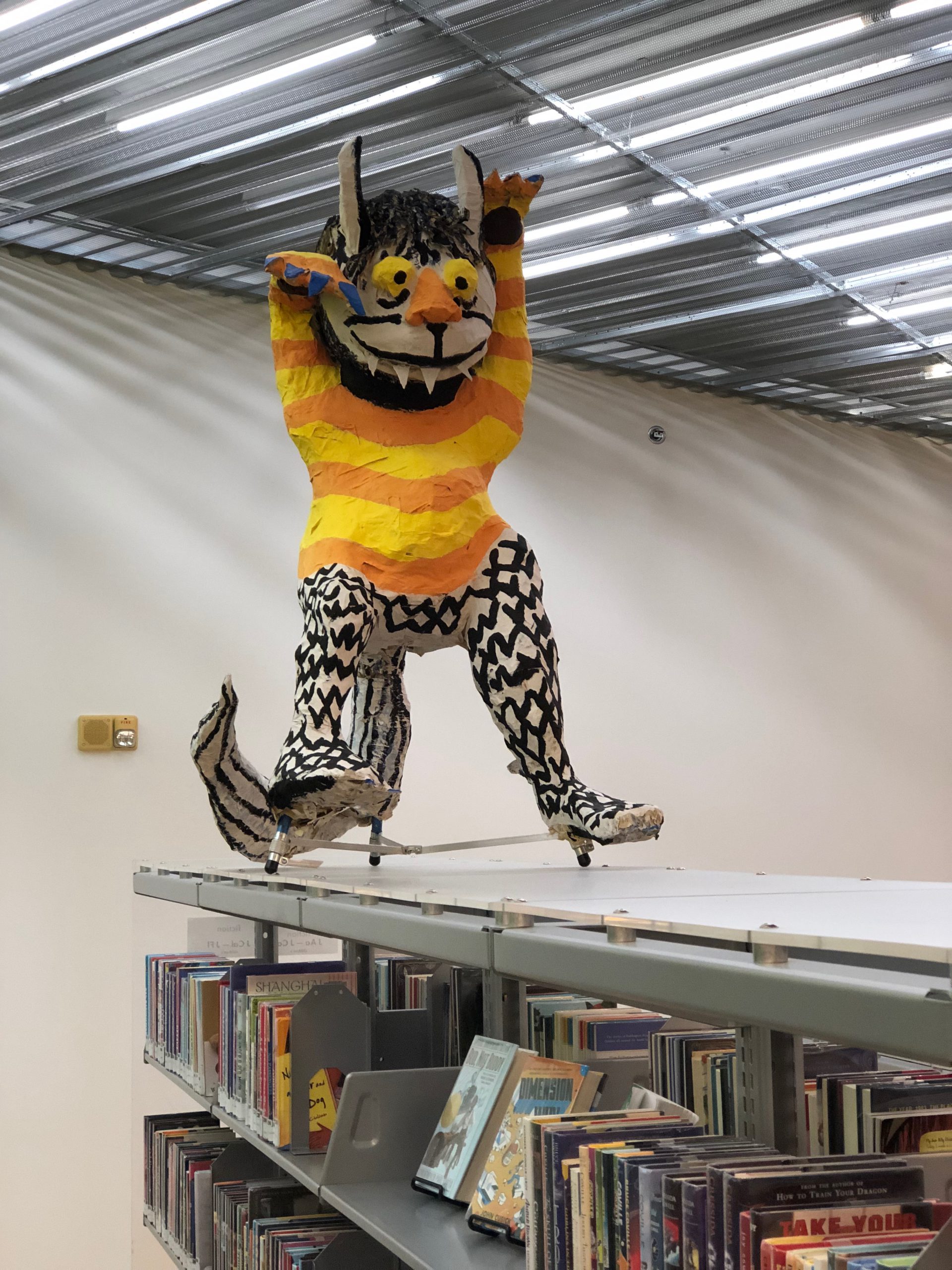 Seattle is a highly diverse city, thus residents read in many different languages. I was reminded of this fact almost immediately when I entered the building; I encountered a cool-looking kiosk decorated with wooden blocks of Asian type and stacks of books I couldn’t read because they’re written in foreign languages, which probably included native American languages. How did I know that? It was Ann Hamilton’s artwork featuring 556 lines of raised text in 11 different languages printed on the floor that alerted me to this fact. A visitor quickly learns to look down to find directions in this 11-story building. Even without traditional signage, the function of each area is obvious. For instance, I knew I entered the children’s area by the giant papier-mâché “Wild Thing” dancing on top of the bookshelves. A neon yellow escalator beckons one to ride up a level to a view overlooking the football-field sized Living Room. The banana leaf motif on the carpet suggests a lush tropical space, illuminated by soft floor lighting to complement natural light and a relaxing quiet environment. But patrons will not be shushed, or given the side-eye for playing games, eating, and talking in “outdoor voices” here. Between this floor and the 4thfloor is a staircase leading to the “Red” floor. All the walls, floors, and ceilings are painted using 13 different shades of red. This floor is mainly for staff use, so there isn’t much to see here, but I’ve read that Instagram influencers like it for a backdrop. Somewhere between this space is the Microsoft Auditorium seating for 275. The Information Age requires space and the library has devoted the whole 5thfloor to 338 computers and the old fashioned and familiar Information Desk.

When I visited in Dec. 2021, levels six through nine were still closed to the public. I just discovered the upper levels reopened on Oct. 16, 2022. I’m looking forward to a return visit since the stuff I’m most interested in is on the top levels. I want to experience the Dewey Decimal System etched into the floor as the floors spiral up at a two-degree slope. The gradual ascent winds around a city block and terminates at Level Ten. Level eight covers Arts, Recreation, and Literature. On Level Nine, I’ll find the History, Travel & Maps collection, genealogy collection, map room, writer’s room, and biographies. At the very top, I’ll be able to overlook the Living Room and the designated quiet space, the Reading Room, with seating for over 400.

This was just a quick overview of one of Seattle’s most famous buildings and one of the best public spaces in the city. I’ll leave this with a fun fact. The escalator only goes up. There is no down escalator. Patrons have to ride an elevator down to return to the lower floors.