The Ezra Stoller photographic exhibit on the third floor of Tampa’s Florida Museum of Photographic Arts. (FMoPA)  benefits from its surroundings. It’s housed in one of Tampa’s most iconic architectural sites, the Cube (AKA, Nations Bank). The Stoller exhibit includes photos of Paul Rudolph, Meis van der Rohe, Philip Johnson, Louis Kahn, Marcel Breuer, and Eero Saarien architecture.  The FMoPA galleries are segmented spaces so the flow is choppy. If you’re the type to ask what’s around the next corner?, as I am,  that’s great.  But if you’re not, you may miss half the exhibit — don’t hesitate to explore. 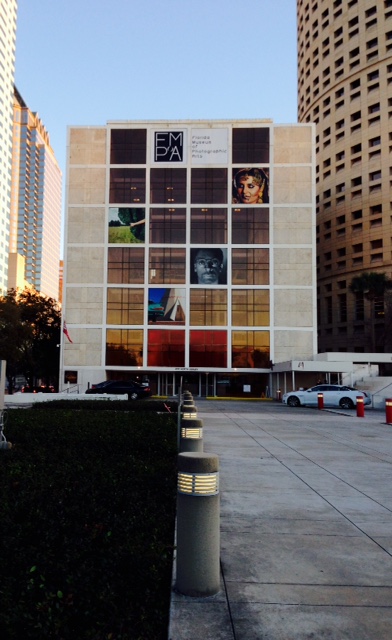 The show is in Tampa’s Cube, (1986-1988) designed by Harry Wolf.  Wolf used limestone throughout the structure and based his proportions on the Fibonacci series. The lobby of the building ascends into an impressive atrium. Kiley  Garden, a parking garage rooftop garden, echoes the Fibonacci series (the Fibonacci mathematical sequence begins with the numbers zero and one and builds on the sum of the previous two.) Dan Kiley’s  squares and rectangles of grass, concrete blocks and gutters (see the link above for a picture) echo the window pattern on the adjacent Beer can building. 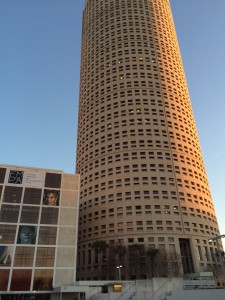 Kiley and Wolf  worked together on the award winning design. Wolf won the  1993 National Honor Award from the American Institute of Architects. Sadly,  the  4. 5 acre Kiley Garden is listed as endangered on the Cultural Landscape Foundation. See it while you can, even in it’s neglected state.  The Cube is at 400 North Ashley Dr. , on Tampa’s Rivergate Park. 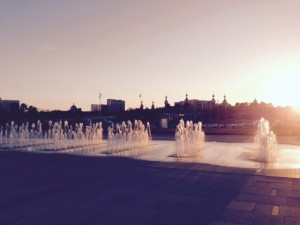 Fountains along N. Ashley Dr. Seen in the background, the Moorish Revival architecture of the University of Tampa. Photo by author.