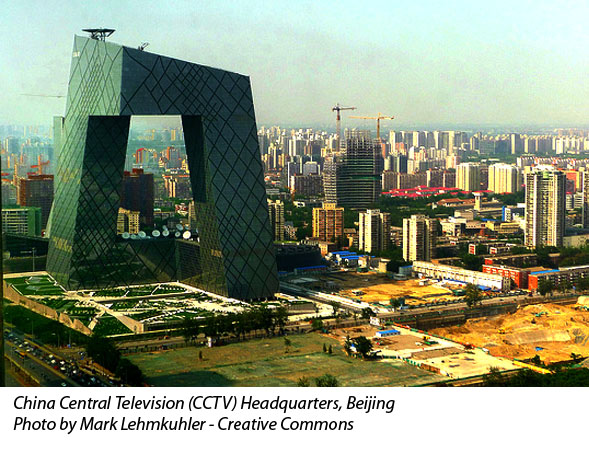 “Weird architecture” and challenging the status quo are Rem Koolhaas’ trademarks. So, a Nov. 26 edition of the magazine Dezeen quoting China’s president Xi Jinping calling for an end to “weird architecture”,[1]  grabbed my attention.

The Chinese president pointed to the China Central Television (CCTV) headquarters in Beijing, completed by Koolhaas’ firm OMA,  as a prime example of weird architecture. Koolhaas argues that the in 2012 CCTV breaks the skyscraper mold by building a bridge between the old and new world. One side of the building is dedicated to offices while the creative side houses 12 TV studios. The exterior on the façade is irregular, as opposed to the ho-hum usual diamond shapes.

After a lifetime of studied urbanism, Koolhaas, 69, said in a 2012 Smithsonian profile that he believes that the countryside is in greater danger of exploitation than the rapid change in cities.  The visionary designer told the Wall Street Journal, in a June 2014 interview that architecture has become too conformist.

The Chinese president’s concern may be about new buildings such as the Giant Penis. The unfinished headquarters for the People’s Daily, the state newspaper, is so phallic looking that the government has tried to block Internet images.

At least Koolhass’ CCTV, which has been dubbed “Big Pants,” leaves something to the imagination.

[1] In the comment section on the DeZeen story, Q asked for the source of China’s president Xi Jinping quote. Amy at DeZeen provided this link as the first source. She stated that the quote was reprinted in other international  publications, but has since been removed.