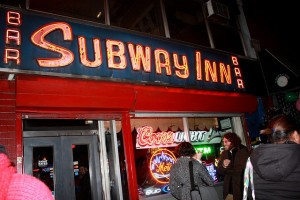 Owners of the 77-year-old  Subway Inn, a neighborhood bar on 60th Street on the Upper East Side,  want it to be declared a New York City Historic Landmark. The briefly married Marilyn Monroe and Joe DiMaggio once stopped in for a cold beer, and the bar’s 1950s  neon sign capture the essence of the era. An Internet petition is circulating asking Mayor Bill de Blasio and New York City Landmarks Preservation Commission Executive Director Kate Daly to decide if longevity, celebrity icons, the neon sign, and local love are enough to stop World-Wide Group from demolishing The Subway.  The development company purchased the building in 2006.