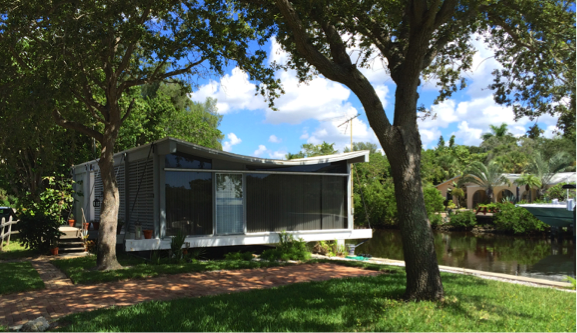 Florida is the third most populous state in the nation and most of the population lives less than 25 feet above sea level. The geography attracts visionaries challenging us to reimagine the landscape. A hundred years ago, the new vision for architecture was Bauhaus, now labeled mid-century modernism, a type of architecture that’s made a comeback. In the 1950s, Sarasota was the epicenter for architects practicing and experimenting with new designs, materials, and philosophies. 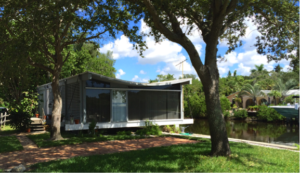 In 1938, how do you draw draw attention to the center of the vast undeveloped Florida state? Florida Southern, a new college opening in Lakeland at that time, wanted to make a big entrance on the national scene. The president decided to do it by hiring the flamboyant modernist architect Frank Lloyd Wright, who had appeared on the cover of Time Magazine that year. 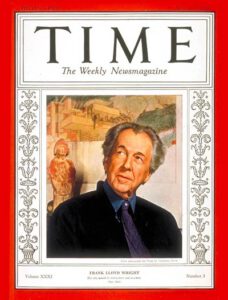 Wright created a series of buildings and named his vision “Child of the Sun.” His modernist foresight drew a young Paul Rudolph to Lakeland to see the most exciting project in the country taking shape. Rudolph was quickly gaining a reputation for innovations. Sarasota architect Ralph Twitchell was aware of the buzz about Rudolph so he took the opportunity to hire him. Rudolph loved the simplicity inspired by Florida’s endless shoreline and the lovely breezes flowing through pre-A/C houses. He envisioned cool Gulf air drifting through tropical modern bungalows. He was the first to design sliding glass doors and jalousie windows. It wasn’t long before Rudolph and other talented designers built Sarasota’s reputation for being a place for innovative work. 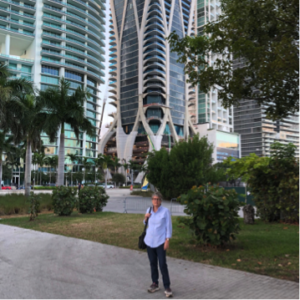 Me in front of Zaha Hadid’s 1000 Museum, Miami. Photo by Dave Pierson

Florida is basically one long beach with some dunes in the middle; the highest elevation is in the panhandle. And we’re experiencing the effects of global warming now. Miami is already elevating streets that are perpetually underwater; this phenomenon is known as “sunny day flooding.” Yet construction is booming on south Florida beaches. New buildings will have to withstand rising sea levels. Pictured above is the newest addition to the Miami skyline, Zaha Hadid’s 1000 Museum. It’s in the yellow zone, meaning that the parking garage is likely to flood with a 3 ft. sea level rise.