Behold! A survivor of a nearly extinct species, brutalist architecture. 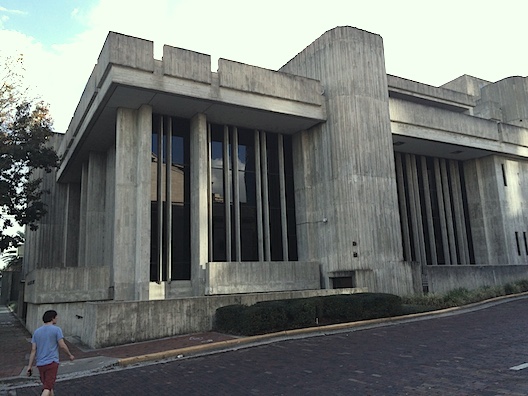 John. M. Johansen, the architect who built the The Orlando Public Library in 1966, must be singing heavenly praises that this building still stands. So far, the library has been a stalwart in the face of the trend to tear down Modernism — and especially its close cousin, brutalism. City fathers could have reverted to a safe (boring) design,  but in 1986 decided instead  to  enlarge this concrete behemoth across a whole block. 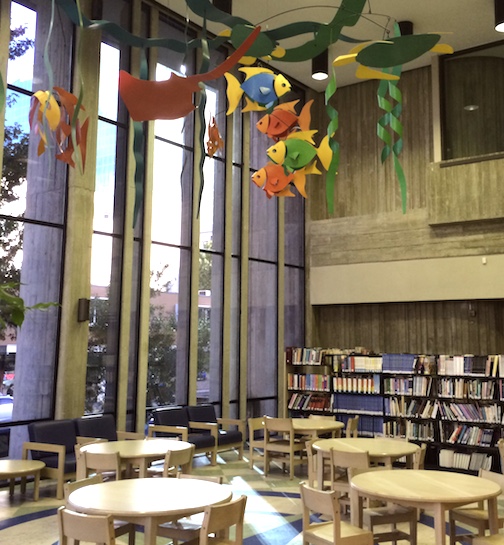 The interior of the library is filled with natural light. This, combined with the colorful fish mobile overhead, belies the gray stone of the exterior and makes an inviting space for children.

It doesn’t appear  this architectural reinvestment was controversial. The Orlando Sentinel, published a commemorative edition celebrating the new wing in the Florida magazine. The beloved library was a mecca for urban dwellers. The public (referred to in the article as “Harry Smith” ) typically  visited weekly to read books and magazines, and check out video tapes. (Sounds quaint now).

If the building’s massive exterior initially felt domineering, once inside, “Harry Smith” found himself in a welcoming lobby. Johansen was one of the architects of the era who loved the fluidity of concrete and the textured surface it produced. Forty-nine years later, that surface has softened with a  pleasant greenish patina.

Time and technology have changed how “Harry Smith” and the Smith children use the library. Today,  “Brittany Smith” can operate a flight simulator or drive a forklift  simulator (below) and check out a book. But I’m not sure about a video tape.

Simulators are available for virtual learning.

Here’s a bit of architect trivia,