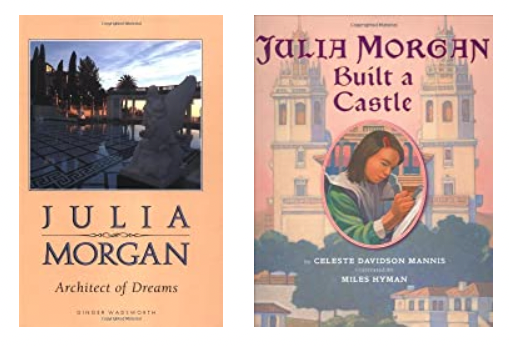 Parents, aunts and uncles, if you have a budding “Beth, the Builder,” instead of a “Bob the Builder” in your family, introduce her to Julia Morgan,  the almost anonymous designer of the Hearst Castle (aka San Simeon), the Gothic setting for the movie Citizen Kane. (Rosebud!). Morgan began the project in 1919 and spent 23 years adding on to the castle. It is a little known fact that she had more fun building a village of Brother’s Grimm Fairy tale castles.  Last week, I wrote a guest blog post for Award-winning writer of romantic fantasy( with a twist), Kathy Bryson, on Morgan’s “Cinderella house,” Wyntoon.

Morgan’s career coincided with the rise of the 1920s Women’s movement.  As a result, she was commissioned to build schools, churches, and YWCAs —  traditionally safe spaces for women and children. Morgan’s versatility and genius was fully recognized in 2014 when she was posthumously awarded AIA’s Gold Medal,  architecture’s highest honor.  She opened the door for women to bring a feminine point-of-view to a (still) male dominated profession.

The AIA Gold Medal helped generate interest in her career. Before that, in 1990,  Ginger Wadsworth published a a biography of Morgan for young adults, Julia Morgan: Architect of Dreams. In 2006, Celeste Davidson Mannis added to the collection with her  picture book, Julia Morgan Built a Castle with illustrations by Miles Hyman. If you have or know of a young sister builder, give her a role model. She’ll need one, there are so few.