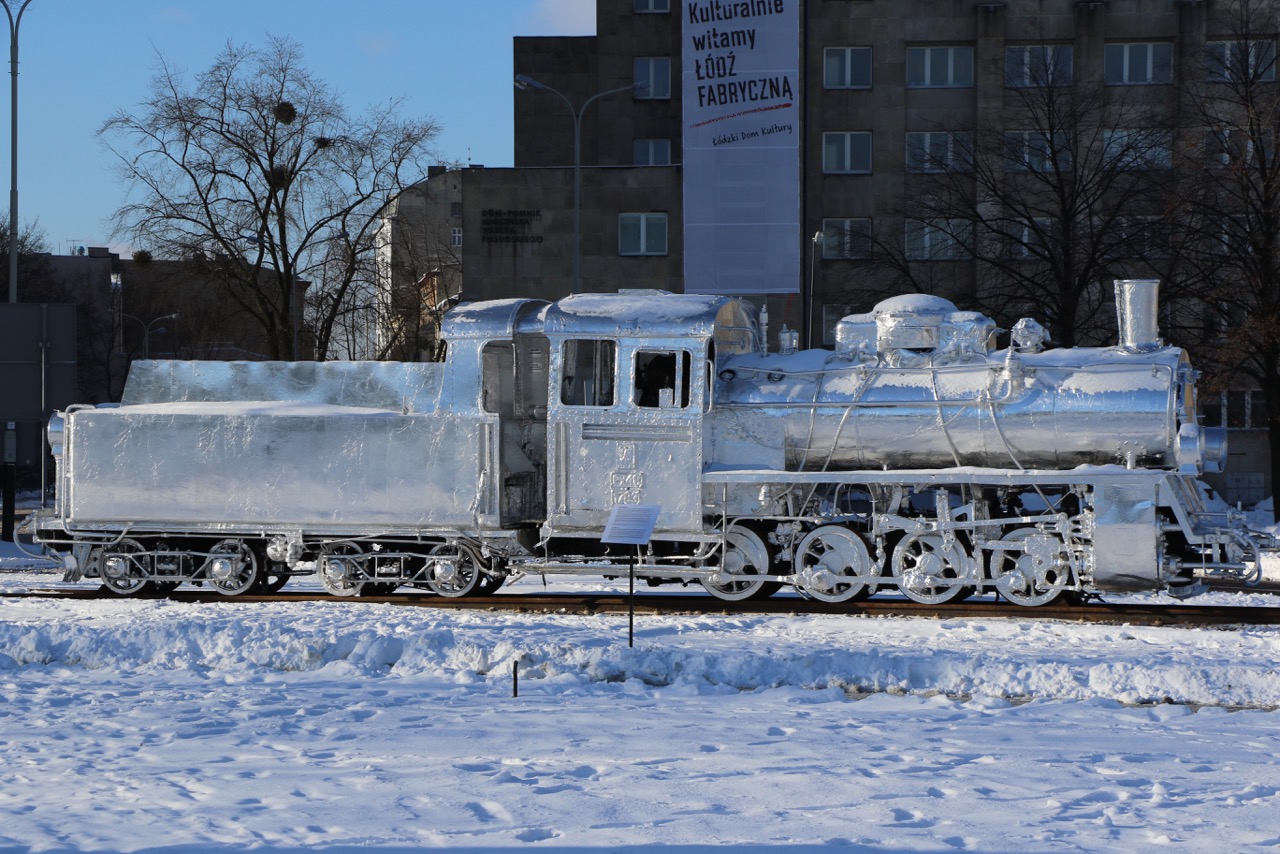 Art reflects past to show the future

In Dec. of 2016, artist Piotr Janowski created a mirage of shimmering awesomeness, a foil clad locomotive. Alas, it has faded into memory, just as this 1950s locomotive has.  But, if you missed it, here’s a chronicle of his massive public art project to commemorate the opening of the Łódź, Fabryczna’s new super modern train station.

In Nov. 2016,  Janowski had visited Fabryczna, in central Poland,  to select  a locomotive to dress in aluminum foil for the commemorative ceremony. 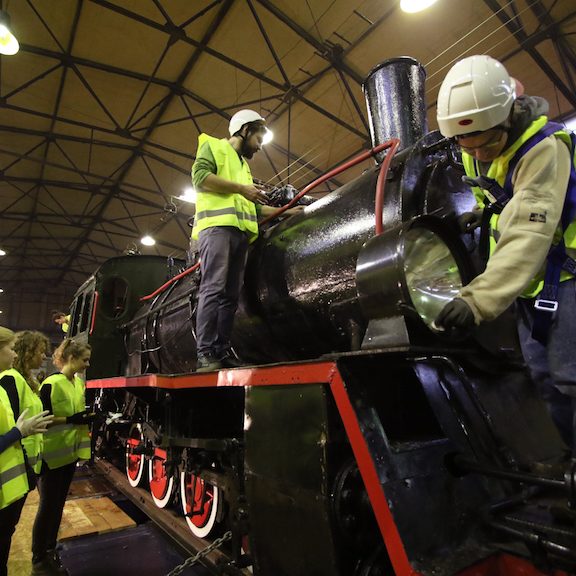 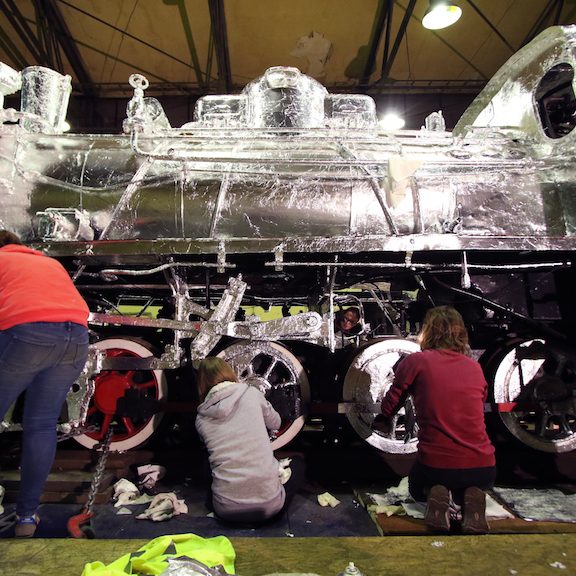 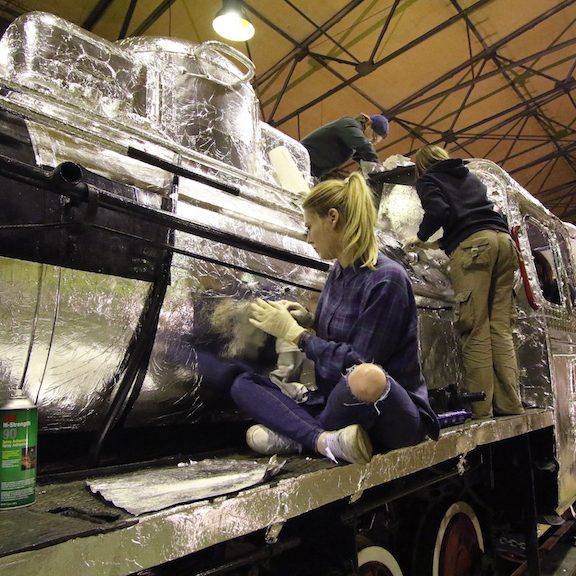 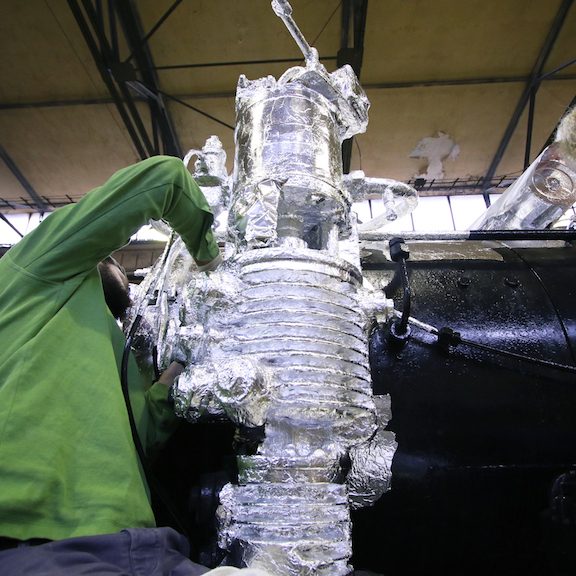 Officials commissioned Janowski to convert a 1953 narrow gage steam engine into a work of public art. When he began the project, he had only seven weeks to complete it.

“I was nervous about this project. I was afraid it was going to look too Disneyish,” said Janowski. “The train is iconic in Łódź; it symbolizes optimism.”  The city is a transportation hub, so Janowski used the  locomotive to connect the history of the past and the future of railway transportation. The opening of the new train station is a key step in reviving the economy in this formerly rich textile-producing city

As the process started, the skeptical municipal workers mumbled under their breath. Finally, curiosity drew them closer to the team of 14 art students swarming over the machine applying a shiny new skin. 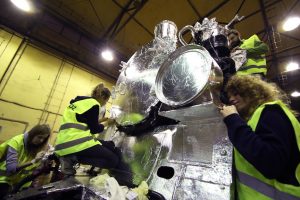 By the third day, the clean faces of her gages poked though their foil collars. Her smokestacks became a three-tiered crown, the beveled numbers on the nameplates popped in relief. Even the wheels sparkled. Cinderella was ready to make her entrance at the royal ball.

“The workers wanted to touch it,” said Janowski. They wanted to have their pictures taken with me standing in front of the train.” One said, “I didn’t know how beautiful the train was until it was covered.” Paradoxically, the cover reveals the obvious. 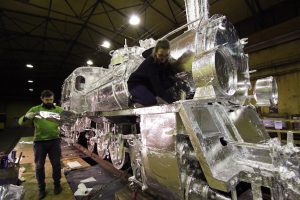 The foil emphasizes shapes and precise angles, says Janowski. He discovered the sculptural fun of working with aluminum foil when he covered his house in foil as part experiment/part ecological statement about solar power. In 2015, he ditched his painting studio and took his art public. The house, named 402 Ashland Ave., created a worldwide buzz. He concealed  the power meter, driveway, and palm trees in the yard of his Tarpon Springs residence.

A few months later, he was invited to cover the palm trees in front of the Museum of Fine Arts in St. Petersburg. The alchemy of the aluminum foil worked magic again for that exhibit, called “Curiosity.”

Back in his native Poland, he proposed an idea to rejuvenate a dead locomotive from several tons of scrap metal into an enormous new Monopoly game piece.

It’s  up to him to envision the potential beauty of machinery. To the person on the street, it’s an absurd idea. The pay-off for the artist is in seeing people smile when they see a familiar object in a completely new way. 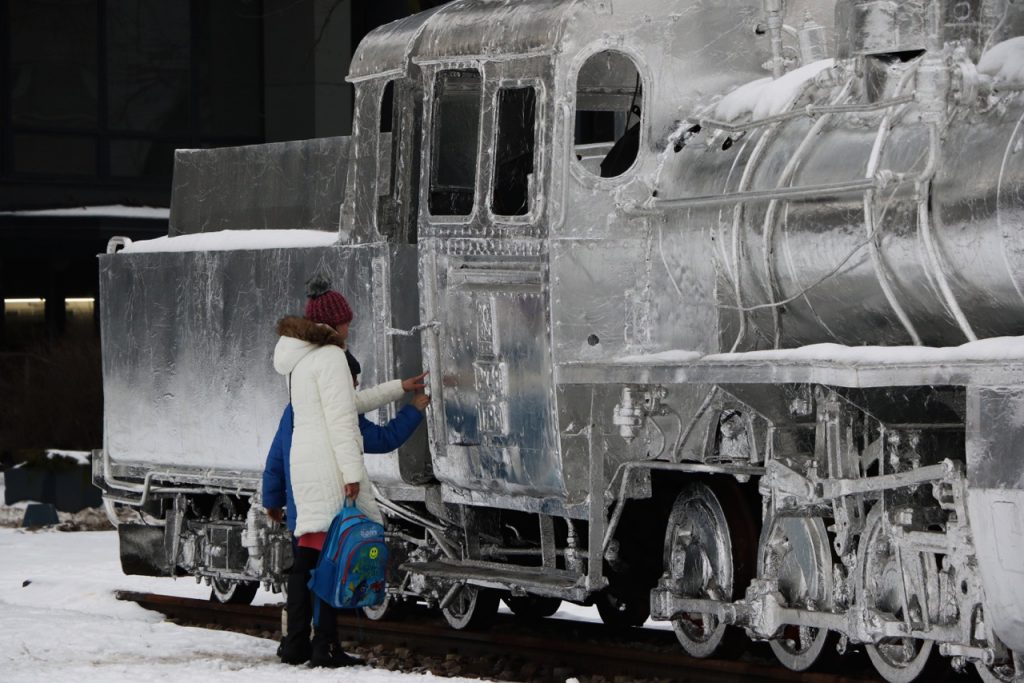 It took more than waving a magic wand to get Cinderella to the ball.  Px 48, the vintage train, now had a new name, Get Off Łódź, Fabryczna. The name reminds people that “Get off, Łódź, Fabryczna” as a great place to finish the journey. 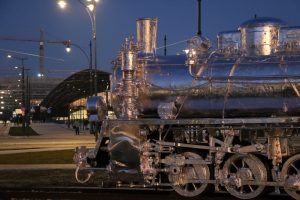 Art students worked in a garage  50 miles away from where Px 48  would make its public debut. 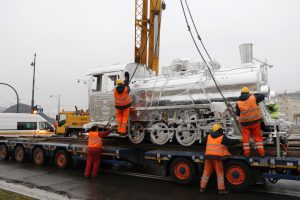 Moving it to the Fabryczna station “was a logistical nightmare.” The star of the show needed an entourage to roll out the red carpet ahead of its arrival. Officials in two cities worked to coordinate building tracks, platforms, and  hiring cranes to lift the train onto the semi for the piggyback ride delivering it to its final destination.

Upon its arrival, workers welded the wheels onto the new rails. Miraculously, Get Off Łódź, Fabryczna arrived right on schedule for the opening ceremony.

“They came — the mayor, the vice mayor, all the city workers and a thousand people from the town. It was significant and powerful.” Says Janowski.

People created their own memories. The art students described the foiling process as  “meditative.” One likened the shiny creation to a “huge crystal” because it changes colors throughout the day.”

Of course, kids loved it. 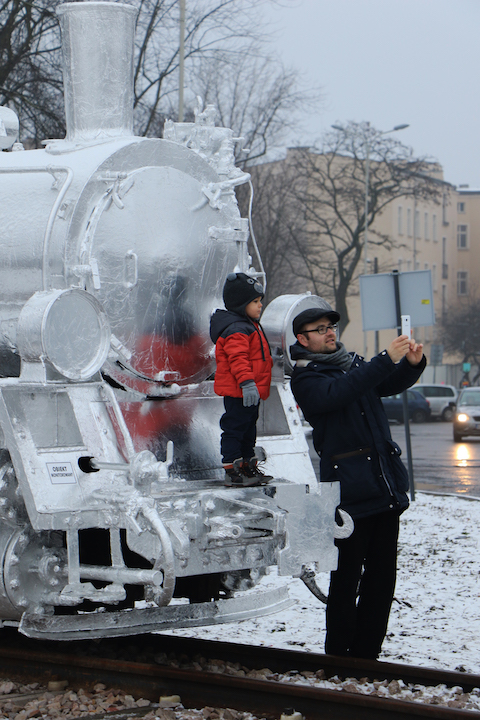 “So many kids wanted to go in, touch it.”. Surprisingly, hardly a single little fingernail scratched through the thin foil covering.”

“Public art is for everyone,” he says. “It’s very important for me to involve the urban and the natural environment into my art and to open new perspectives. Life moves too fast. I want to provoke people to stop and think.”