Sixty years after British architectural critic Ian Nairn expressed “Outrage,”  that post WWII English cities had lost their identities to look-alike architecture, the debate continues — and  the BBC is asking citizens to report — was Nairn right? 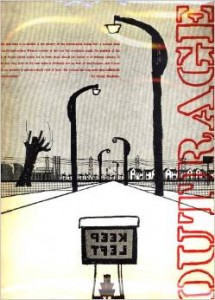 BBC News Magazine revisits the issue and asks citizens to tweet on #MySubtopia on whether or not the spread of corporate architecture has robbed the defining character of High Street.

In the mid-1950s, Nairn lamented that quick rebuilding to replace bombed- out blocks across the English countryside had created a   “Subtopia.” He defined it as the “steamrollering of all individuality of place to one uniform and mediocre pattern.”

He had help from architectural conservationists who screamed “halt!” as city officials, in their their zeal to remove all dilapidated buildings, scraped away many historic buildings as well. In America, a similar situation was occurring as federal dollars funded Urban Renewal in the name of scouring the cities from urban blight (slums).  Across the pond, as they like to say in England, Jane Jacobs in ,The Death and Life of Great American Cities, also took a populist view.  “Each street has its own kind of problem, and probably needs its own kind of solution.” She refers to  Nairn’s photo essays in Outrage  for exposing the visual blight (street lamps, power lines, and traffic signs) when cars, and not people, become the focus of city planners.

Once again, cities worldwide are rapidly transforming and architecture is playing a leading role. This time, we have 60 years of hindsight to put the past in proper perspective.  BBC News Magazine revisits the issue and asks citizens to tweet on #MySubtopia and weigh in on  whether or not the spread of corporate architecture has robbed the defining character of High Street.

← Prev: FLW inspires Simon's harmony Next: Would Jane Jacobs applaud the rebirth of the city? →