Developing a knack for kayaking

We are good to go!

Last month, my husband Dave and I finally found the most important feature we were looking for in a kayak – lite weight. Our local dealer introduced us to the Crescent Ultra Lite, and three years after we had installed roof rails on our car, when we saw the orange beauties, we plunked down the cash and joined watersport nation.

As we drove off his lot with our new yaks stacked like mattresses and tied down with crisscrossing ropes over and around the boats, the dealer’s parting words were, buy J-hooks. Sporty people use J-hooks to hold their kayaks to the roof of their SUVs.  Suddenly, I was part of the J-hook generation!

When the hooks arrived via mail order, we opened the box and found four unassembled black hangers, four straps, and instructions containing 13 different parts, and a picture showing the boats already in the racks and tied down. Based on the brief directions, we expected to spend about 10-minutes loading the boats. So, a few days after our purchase, we decided to take our new toys out for an evening paddle around the waterfront property near where we live.

It was a good thing we started early because assembling the racks took more than an hour. Once that was done we still had to load the boats. Dave and I stood in the driveway examining the simple picture. My job on the crew was to hold up the not so ultra lite41-pound stern over my head while Dave jostled the bow sideways and slid it into the U part of the J from his end; easy-peazy.

Another hour later, as the sun sunk in the West, we admitted that our configuration didn’t match the picture. Normally, we would have settled for good enough, but a vision of two orange torpedoes shooting off the roof of our car into traffic made me think again. 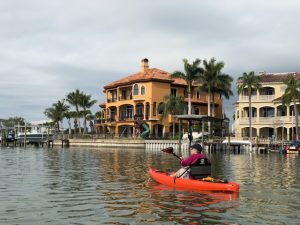 Many of the boat owners living in these mansions have multiple outboard motors with enough horsepower to get to Cuba on one tank of gas.

After I stepped in an anthill, and we scuffed the paint off the roof of the car as we dragged the boats down for a second time, our can-do attitude also wore thin. Becoming an armchair traveler had a new appeal, but I didn’t say so out loud. We re-examined the picture and realized the loop goes over the top of the hook. Done right, it magically holds the boat without shifting. Victorious and exhausted, we left our shocking orange boats screaming success on top of the car and planned to go out for a sunrise paddle.

Our maiden voyage proved to be an easy cruise around calm waters on a clear morning. We slow paddled around the finger canals between the waterfront houses and as we passed rows and rows of massive outboard engines, I thought this could be called a “lifestyles of the rich” tour. Dave counted not one, but four 550 engines on a Boston Whaler. In the distance, I heard the gurgle, gurgle, gurgle, of an idling boat. It sounded as if someone was laughing at us in our ultra lite kayaks.

On the way home, we loaded up the boats using a beach towel to protect the paint and congratulated ourselves for getting them to the water, in the water, and out of the water, without falling into the water, (but that was just luck). And, we can proudly proclaim that no fossil fuels were burned on this tour.