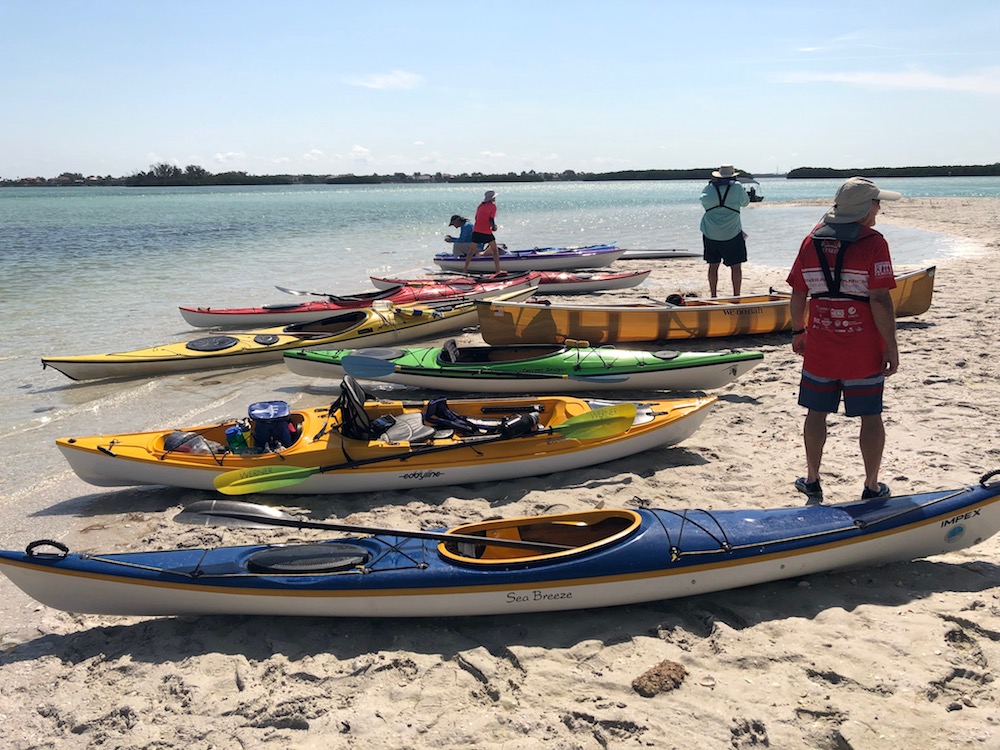 When the Sierra Club advertised a bird-watching kayak tour to Shell Key, Dave and I signed up. True confession: We’ve lived in Pinellas County for 40 years and I’ve never been to one of the most popular boating destinations in St. Pete. Now that we have our own kayaks, I was ready to go.

We set off paddling for the first stop toward four mangrove islands that marked our destinations. Our guide, Gary, led our group on a standup paddleboard like a daddy duck guiding his family of ducklings — Oh, now I got it, wewere the fledglings! Gary hoped to show us a flock of roseate spoonbills that often roost there. Alas, the pink stars didn’t make an appearance and we pushed onward. 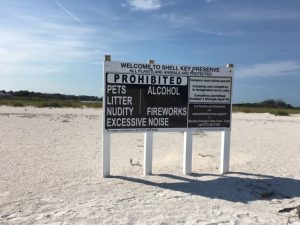 Shell Key is so popular with boaters there are rules for good behavior posted. 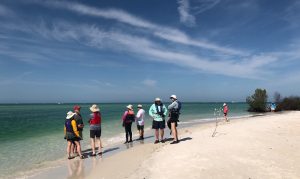 About 30 minutes later, we landed on Shell Key and parked our kayaks on the sandbar. As we hiked a short distance to the water, I noticed high-rise condos

under construction on nearby Tierra Verde. Even though new beach building seems like a bad idea, I can see why people want to live out here. It’s close to downtown St. Petersburg, while still living in paradise surrounded by mesmerizing blue water. The sparkling water must lull buyers into a state of climate naiveté. Chances are real estate agents downplay warnings that rising sea levels may put Tierra Verde underwater within a couple of decades. I asked 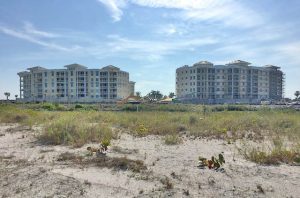 Gary about the new construction; he shrugged his shoulders in response. He seemed to have an it-will-all-come-out-in-the-wash attitude. My guess is he’s probably remembering that this lovely stream flowing through the inlet exists thanks to an angry wave. Two years ago, Hurricane Irma blew through Tampa Bay as a Category 1 storm. It opened a sandbar allowing a flood of brackish water to stream into a lagoon. Natural disasters are devastating for people, but often, storms have positive side effects. Gary reported that two years ago the water quality was stagnant and killing the mangroves. Then Irma came and flushed fresh water into the inlet, rejuvenating the plants.  The lesson: Mother Nature gives and Mother Nature takes away.

On this day, the water was postcard blue and teaming with life, including boaters.  People are also rejuvenated and 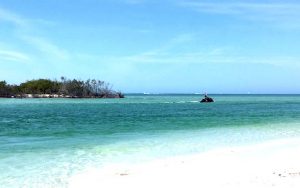 drawn to this place by silent and solitary pleasures like bird watching, fishing, and art. An artist made a shell and driftwood sculpture and left the work for visitors to admire. I waded into the warm lapping water and dug my toes into the sand. Ah, peace and quiet. The water here is so transparent that a reddish egret plucked minnows as they swam by. This is real Florida! Seconds later, a high-pitched whine of jet skis broke the sound barrier. My territorial tendencies kicked in, and I resisted the urge to shout Not In My Lagoon! I realized the wave runners are also real Florida. I took a deep breath and told myself to be more like the wading bird, oblivious to the racers. Ommm.

We were leaving anyway. Our kayak armada pushed off the sandbar, navigated around the swift current, and headed toward a patch of thick mangroves where Gary wanted us to experience a tunnel. By now, it was noon; and the sun was high, and I was feeling it. One by one, we paddled our way through an opening into the prop roots,  the tall roots standing like stilts holding the crown of the trees aloft. Instantly, the temperature dropped about 10 degrees. The roots are so thick even a person sitting in an orange kayak could get lost among them. We navigated our way through and emerged without losing anyone; well, it was a short trail.

As we headed back to the launch site, I pondered evidence that in the wake of a hurricane, nature will recover, even benefit, but people living in condos may not. So why isn’t the tough mangrove the state tree? Instead, it’s the sabal palm, good for the uplands. But the coastal mangrove don’t get no respect. The roots hold the sand in place and could save the state from washing away.

Dying mangroves next to healthy trees.

Basically, they’re the border walls of Florida and they’re free! That’s why, in the age of rising sea levels the state tree deserves reconsideration. It’s true, they’re protected; yet, waterfront property owners tear them out in a bulldozer’s second to open up the view. That attitude is so Florida. Newcomers move to the beach in search of serenity, but quickly find serenity overrated and succumb to the urge to torque a jet ski into full throttle.

I’m not a marine biologist, but newbies should know that Tampa Bay is an endangered estuary and a lynchpin to ensure the health of swimming, breathing, flying, and crawling creatures in the Gulf. It’s not very exciting, but sea grass and mangroves hold the whole tapestry of life together. According to the Florida Department of Environmental Protection, in the past 100 years, Tampa Bay has lost almost half of its mangroves and wetlands. Maybe the state should monetize the mangroves and start a public relations campaign to promote their lovability.  I know; the idea is farfetched.  After all, I live in a state where in 2015 the governor banned the words “climate change” and “global warming” from official state use in DEP documents. 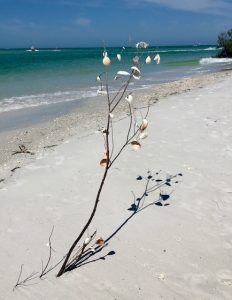