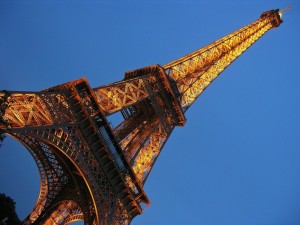 When you experience an unexplainable computer glitch (often just as you’re about to hit send), do you wonder if gremlins are behind the scene giggling while they watch you struggle to find a missing document or get rid of something that appeared out of no where? I do. So I decided to ask writer Kathy Bryson, a fan of fairy mythology, if she knows of any sprites from underworld who like to disrupt technology.  Here’s her guest post on the magic behind the Eiffel Tower, iron, and fairies.  I hope you enjoy this post. Thanks Kathy! 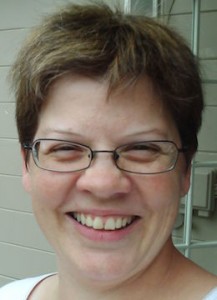 Thank you, Kyle, for inviting me to guest post on your blog. I’ve really enjoyed reading about the different styles and uses of architecture that you cover, particularly as an iconic American building, the skyscraper, had an enormous impact on the world of fairies.

I know what you’re thinking. Don’t fairies usually hang out in gardens and such? Certainly they enjoy flowers and nature, but a big difference between the fairy world and ours is iron. Some say it interferes with magic, some say it’s symbolic of change, but whatever the reason, fairies don’t like iron.

Iron is the most common metal on earth, but it wasn’t used widely until after 1200 BC because bronze is easier to smelt. After Ramses III defeated the Sea People, trade routes that supplied tin needed for bronze collapsed, and someone figured out how to add carbon to iron to create steel. Iron by itself is brittle, but steel is stronger, lighter, and holds an edge!

Probably the most famous iron building ever constructed is the Eiffel Tower built for the 1889 World’s Fair. It’s build of wrought iron which has a lower carbon content than steel, but is still flexible. That ability to move is why the Eiffel Tower has its unique shape. Eiffel said, “Now to what phenomenon did I give primary concern in designing the Tower? It was wind resistance.”

The development of better foundries in the late 1800s and mass production led to different types of steel with varying tensile strength, or the maximum stress that a material can stand before failing or breaking. Ernest Ransome invented rebar or steel cables by 1884, and the first reinforced concrete skyscraper, the Ingalls Building in Ohio, was built in 1903. To the amazement of many, the 16-story building did not collapse under its own weight, and the age of the skyscraper was born.

I imagine fairies came to the New World for the same reasons everyone else did. Fairy stories tell of farmers who left out part of the harvest for luck, but iron meant that farmers no longer had to share. It’s hard (for a menacing trickster) to argue with a scythe

So the free-wheeling fairy world had to change. The stories say they went underground, but today iron is everywhere. There’s iron in highways, in pipes, reinforcements, any structural support. In soft earth, there’s a whole web of rebar underneath the asphalt and concrete. That might sound bad for fairies, but there’s a reason the stories persist even today!